What Would Happen if Everyone in Seattle Flushed Their Toilets Simultaneously? 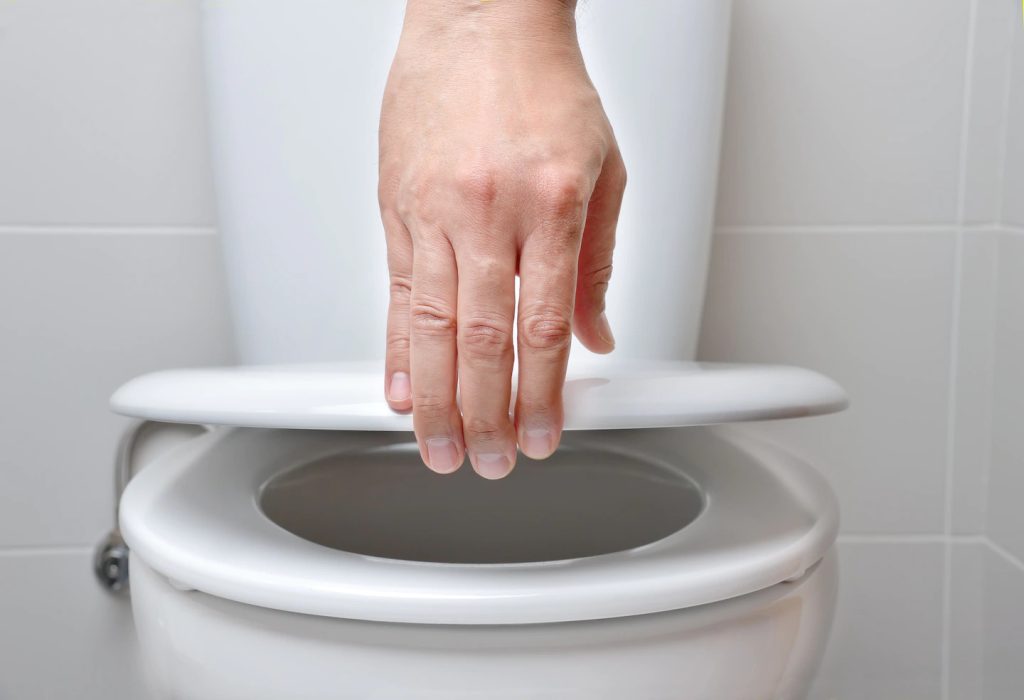 When it comes to toilets, most people take a "let's not talk about it" stance. After all, discussing your bathroom habits isn't exactly dinner party talk. But while toilet talk might not make for polite conversation, it creates an interesting dialogue about water, quality and conservation.

Whether it's hypothesizing over what would happen if everyone in Seattle flushed at exactly the same time or how water use is affected during big sports games like the Super Bowl (go Seahawks!) your toilet might play a bigger part in your lifestyle than you realize.

While it has some of the highest rain levels in the United States, water in Seattle must be conserved. Gaining a better understanding of how the water system works and what you can do to conserve your usage means you're doing your part to protect the water supply for the entire country – not just Seattle.

Before you understand what would happen if everyone in Seattle used the toilet at the very same second, you must first understand the way the water system works in the city.

Each home delivers water and removes waste via four-inch pipes. Homes are all connected to a subdivision system, which runs to a street system to a road system and eventually to the utility treatment plant – the water plant.

For each step of the way, the pipes become bigger to accommodate the extra waste. By the time toilet waste makes its way to the water treatment plant, the pipes have increased to about 12 inches in diameter – plenty of room, right? Well, here's the thing: the average toilet takes 3.5 gallons of water per flush, unless of course, you're using a low-flow toilet. Unfortunately, most homes have standard toilets, which mean a standard amount of water.

Therefore, if all of the residences in Seattle flushed at the same time, you'd have around 290,000 toilets flushing at once, sending 1,015,000 gallons of water pulsing through the city's sewage system.

And while the large pipes are equipped to handle some simultaneous usage, having over a million gallons flush through the system at once could cause 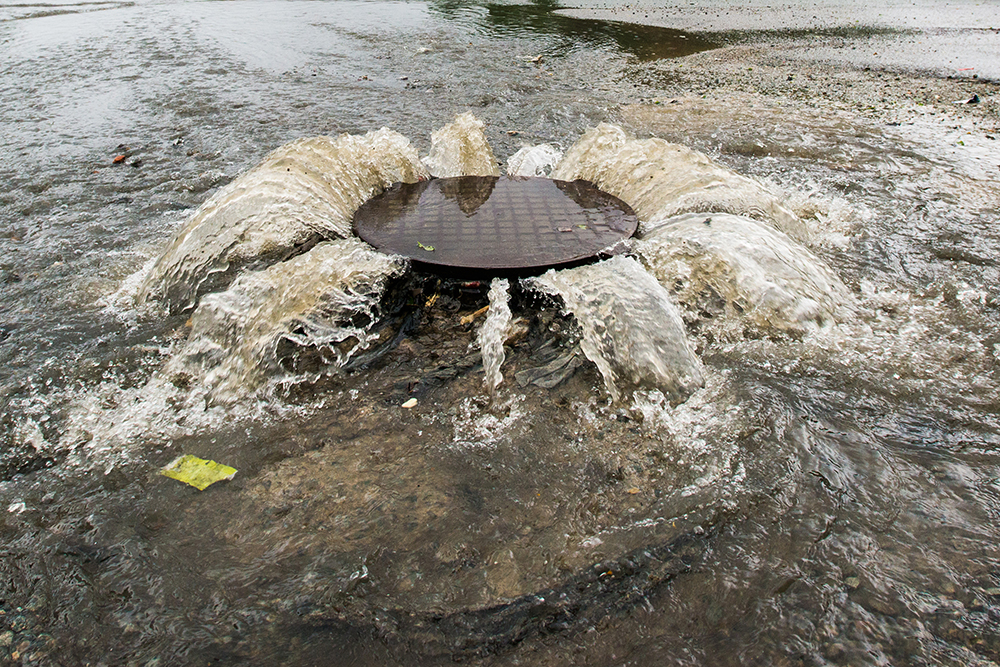 This is what a manhole overflow looks like. Not pretty.

The other potential issue is that with every flush, the toilets would need to refill themselves. That many toilets all flushing at once could put a serious strain on water supply, which means some homes wouldn't get the water back after their flush.

Of course, it's all a hypothetical. There are a few reasons why simultaneous flushes and a major sewage disaster would be unlikely in Seattle at all.

First, the effects of each flush are localized to each subdivision. Therefore, even if an entire subdivision flushed at the same time, other areas would not be affected. It would literally have to be the entire city to have a dire effect.

What's more, even when toilets are simultaneously flushed, some toilets have a longer lag time than others, which means there would still be a few second delays among different models and water levels. As the toilets all flush at different rates, even a city-wide simultaneous toilet power flush wouldn't be truly simultaneous.

The moral of the story? While flushing simultaneously could result in a city-wide sewage disaster, the logistics are so complicated that it's unlikely ever to happen. Still, it's not a bad fact to pull out at your next dinner party, right?

It's safe to say that just about every resident of Seattle was completely glued to their TVs in February 2014, when the Seahawks took on the Broncos to score the franchise's first Lombardi trophy. But while most people hear Super Bowl and think commercials, family, friends, food and booze, toilets were also getting a workout.

It's interesting to look at the patterns of water usage during a traditional Super Bowl game – probably one of the times most likely to increase toilet flushing to the point of simultaneous flushes. No, the Super Bowl probably wouldn't case city-wide sewage overflow, but it's an exercise in seeing how many people use the bathroom at the same time. Take the 2011 Super Bowl, for example. Water use research published on Business Insider found clear patterns of water usage during the big game.

While you might expect that there was a rush on the bathroom during the beginning of half time, most viewers were back in their seats by the time the Black Eyed Peas took the stage. There was also a slight bump in flushing at the end of each quarter, and most surprisingly, when the game was over and the trophy was actually awarded. That means that while most viewers kicked back once the game was finally over, they were up and out of their seats within minutes.

Now, compared to an average Sunday night football game, the spikes in water usage are much more pronounced during breaks throughout the Super Bowl, proving that more people are glued to higher stakes games and won't want to miss a moment. What's more, most people took their bathroom breaks during the first half and stayed put for most of the second half of the game – making a run for it after the last few seconds.

With Seattle playing in and winning the 2014 Super Bowl, it begs the question: which residents of the U.S. were heading to the bathroom throughout the game, and which ones stuck around until halftime? While it's difficult to define location-specific data, one thing is for sure: the entire city was watching.

In Seattle, it's not all about the toilets. Rather, the drinking water in the city is actually among some of the most desirable in the United States. Of course, the irony is that in a city where water and rainfall are fairly plentiful, water can cost a pretty penny. In fact, Seattle has some of the most expensive water in the country, even beating out traditionally expensive Boston. Still, plenty of residents are happy to pay extra for what may be the best nationwide drinking water. In Seattle, the cost for residential water is $6.52 per 1,000 gallons. That may not seem like much, but the national average is closer to about $3. And, since the average Seattle resident uses up about 52 gallons per day, it works out to a cost of around $117 per month, according to data collected by water conservation site Circle of Blue. But while it may seem pricey, cities with traditionally low rainfall often pay more – take Santa Fe, where residents cough up over $12 for each 1,000 gallons they use. Only 1% of world's water supply is fit for humans!

Sure, Seattle benefits from a high amount of rainfall, but get this: of the entire world's water supply, 97 percent is too salty for consumption, 2 percent is frozen in ice form and just 1 percent is fit for humans. When you think of it on that level, water conservations becomes more than just a way to save money, but a method of protecting quality of life and respecting the planet.

While your water bill may be a bit steep, water conservation methods can help you slash your bill and do something good for the environment.

For instance, remember your water-guzzling toilet? Replacing it with a low flow toilet for about $100 to $300 means you can save a gallon on each flush for about a 20 percent savings on your water bill each month.

Or, if you don't want to purchase a new toilet, try sticking a brick or rock in your toilet's tank to displace more water and reduce the amount the tank fills after each flush. Not to mention that leaking faucet that’s been bothering you for weeks…

Several public projects are being used to conserve Seattle's water usage, including the revamping of six of the city's reservoirs. Rather than open reservoirs, the City of Seattle has agreed to store that water in safer, protected underground reservoirs to preserve the water's quality.

What's more, a grassroots campaign has begun across the city that harnesses rainwater and essentially pours it into plant life used to beautify the Seattle cityscape. While this helps utilize rainwater and decorate the city with plants, it can also reduce rain runoff, which can actually deteriorate sidewalks and promote pollution when mixed with trash and other substances.

Here are few other methods you can use to conserve water:

While none of those methods will make a huge change by themselves, together they can save up some of that precious Seattle drinking water for when it's needed most. If everyone in Seattle pulls together to do their part, the city can easily remain one of the most desirable U.S. cities for drinking water.

Following Seattle's example, other American cities might think more about their own large-scale conservation efforts. Even knowing how much water it takes to flush, along with ways to recycle food and reduce carbon footprints makes for a great place to start – both in your own home and for your entire city.